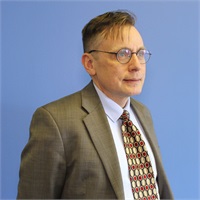 John was admitted to the Kentucky Bar in 1992 and has worked as a sole practitioner since that time. He is licensed to practice law in Kentucky Courts, as well as the US District Courts for the Eastern and Western Districts of Kentucky and the Southern District of Indiana. He has served as an Arbitrator for the Better Business Bureau for more than a decade and has also been appointed Guardian Ad Litem for inmates and disabled parties in Jefferson County Courts.

John is a past president of Sigma Delta Kappa, Intercollegiate Law Fraternity.

In 1988 he graduated from the University of Louisville College of Arts and Sciences with a Bachelor of Science degree in Political science. While in college, he worked as an intern in the office of US Senator Wendell H. Ford.

John is a 6th generation Louisvillian. He graduated from St. Xavier High School in 1984. He lives in Louisville with his wife, Mickey and their daughter, Claire.